Psychedelic Daze is presented courtesy of “music futurist” Don Robertson, composer, music educator, and author. In this twelve-part series, Mr. Robertson presents a comprehensive look back at the San Francisco counterculture movement (1965-1969) and the role that music and musicians played in this era.

The series of articles begins with the 1965 anti-war movement in Berkeley, the formation of the Black Panthers in 1966, and the role of the radical-left radio station KPFA, the first listener-supported radio station in the U.S. and a forum for new voices and ideas, including the first radio broadcast of Allen Ginsberg’s “Howl.”

Most of the series explores San Francisco in the 1960s. The articles include links to rare video footage such as the 1967 “Human Be-In” at Golden Gate Park, an “Acid Test Graduation Ceremony” led by Ken Kesey, and a 1965 press conference with a very young Bob Dylan. Other video links feature performances by the Grateful Dead, Jefferson Airplane, Moby Grape, and other iconic bands of counterculture San Francisco.

Whether you experienced the 60s in San Francisco or have just heard stories about it and listened to its music, Psychedelic Daze offers a deep dive into a seminal period in San Francisco (and American) history. So dig out those love beads, put a flower in your hair, and enjoy the trip.

To read the complete series please visit Don’s website. The excerpt below is from part two:

Psychedelic Daze Part Two:
“The Heroes of the Hip”

This is Part 2 of my 12-part series on the San Francisco countercultural movement of 1965-1969 that created a revolution in music and culture. I was a part of that movement, recording my album Dawn for Mercury Records in San Francisco in 1969.

The future of music depends on our knowledge of the important musical traditions of the past.

I arrived on the San Francisco Bay Area scene in the summer of 1968. I had come to Berkeley to study tabla with the great Indian tabla player, Shankar Ghosh. My guru, Ustad Ali Akbar Khan, had opened a school for the study of Indian music that summer in a Berkeley fraternity house. All I can say is that I “blew my mind” (an expression invented by the sixties sub-culture) when I got to the Bay Area and saw, and experienced, what was taking place in Berkeley and in San Francisco’s Haight-Ashbury counterculture. I’m a musician, but what I was experiencing was not just musical, it was cultural.

I’ll start by acknowledging Wikipedia for much of my background information.

Travus “T” Hipp
The Red Dog Saloon is a bar and live music venue located in the isolated, old-time mining town of Virginia City, Nevada. It played an important role in the history of the psychedelic music scene. In April 1963, Chandler A. Laughlin III established a kind of tribal, family identity among approximately fifty people who attended a traditional, all-night Native American peyote ceremony in a rural setting. This ceremony combined a psychedelic experience with traditional Native American spiritual values; these people went on to sponsor a unique genre of musical expression and performance at the Red Dog Saloon. 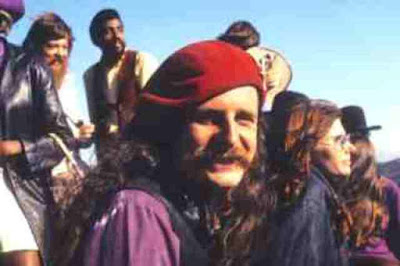 During the summer of 1965, Laughlin, a radio music pioneer and news commentator who used the pseudonym Travus T. Hipp, recruited much of the original talent that led to a unique amalgam of traditional folk music and the developing psychedelic rock scene. He and his cohorts created what became known as “The Red Dog Experience,” featuring previously unknown musical acts — Big Brother and the Holding Company, The Charlatans, The Wildflower and others — who played in the completely refurbished, intimate setting of Virginia City’s Red Dog Saloon. There was no clear delineation between “performers” and “audience” in “The Red Dog Experience,” during which music, psychedelic experimentation, a unique sense of personal style and Bill Ham’s first primitive light shows combined to create a new sense of community. Laughlin and George Hunter of the Charlatans wore long hair, boots and outrageous clothing of distinctly American (and Native American) heritage.

I will talk more about Travis T. Hipp later, but for now I want to move ahead in the story of the Haight-Ashbury Counterculture. 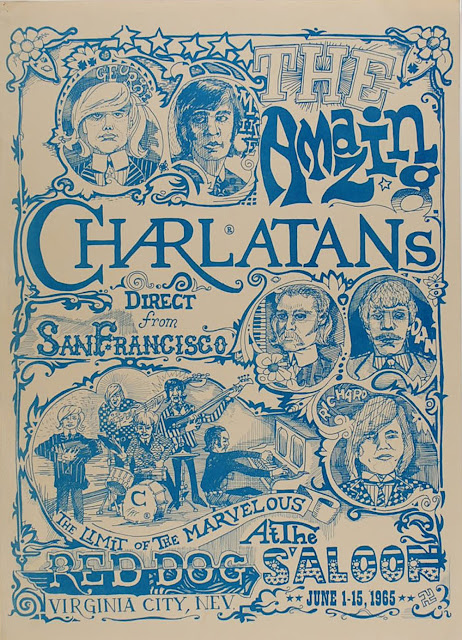 The Seed
The poster for the first six week stint of performances from The Charlatans beginning in June 1965 is the first one of the rarest psychedelic posters. It is known as “The Seed”.

Owsley
LSD manufacturer Owsley Stanley lived in Berkeley during 1965 and provided much of the LSD that became a seminal part of the “Red Dog Experience,” the early evolution of psychedelic rock and budding hippie culture. At the Red Dog Saloon, The Charlatans were the first psychedelic rock band to play live (albeit unintentionally) loaded on LSD.

The Charlatans
The Charlatans were an influential psychedelic rock band that played a role in the development of the San Francisco music scene during the 1960s and are often cited by critics as being the first group to play in the style that became known as the San Francisco Sound. Exhibiting more pronounced jug band, country and blues influences than many bands from the same scene, the Charlatans’ rebellious attitude and distinctive late 19th-century fashions exerted a major influence on the Summer of Love in San Francisco. 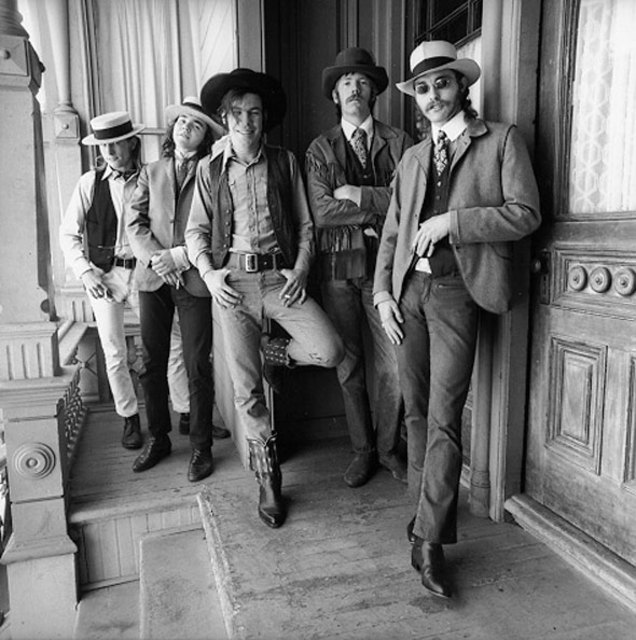 The Diggers
The Diggers were a radical community-action group of activists and Improvisational actors operating from 1967 to 1968, and based in the Haight-Ashbury neighborhood of San Francisco. They were closely associated and shared a number of members with the guerrilla theater group “San Francisco Mime Troupe.” The Diggers took their name from the original English Diggers (1649–50) who had promulgated a vision of society free from buying, selling, and private property. During the mid- and late-1960s, the San Francisco Diggers organized free music concerts and works of political art, provided free food, medical care, transport, and temporary housing. and opened stores that gave away stock. Some of their “happenings” included the Death of Money Parade, Intersection Game, Invisible Circus, and Death of Hippie/Birth of Free.

The group sought to create a mini-society free of money and capitalism. The Diggers provided a free food service in the Panhandle of Golden Gate Park in Haight-Ashbury every day at four o’clock, generally feeding over 200 people with a stew from donated meat and vegetables that was served from behind a giant yellow picture frame, called the Free Frame of Reference. On one occasion, at a free concert in the park, people who came for the food were given a two-inch-by-two-inch frame to hang about their necks, called the “Portable Free Frame of Reference.” The Diggers also popularized whole-wheat bread with their Digger Bread, baked in coffee cans at the Free Bakery in the basement of Episcopal All Saints Church on 1350 Waller Street. In cooperation with All Saints Church and later via the Haight Ashbury Switchboard at 1830 Fell Street, they arranged free “crashpads” for homeless youth drawn to the Haight-Ashbury area.

They opened numerous free stores in Haight-Ashbury, in which all items were free for the taking or giving. The stores offered discarded items that were still in usable condition. The first Free Store, in a six-car garage on Page Street that they found filled with empty frames that they tacked up on the side of the building, was called the “Free Frame of Reference” and was later superseded by the “Trip Without a Ticket” on Frederick Street. It was unclear how the stores were funded. The “1% Free” poster, showing two Chinese Tong assassins under the Chinese character for revolution, was thought to be demanding a 1% tithe from merchants, but that was not the case. The poster was a challenge, implicitly suggesting that ‘free’ people were the minority, and inciting others to step up. They also opened a Free Medical Clinic, initially by inviting volunteers from the University of California, San Francisco medical school up the hill from the neighborhood.

They threw free parties with music provided by the Grateful Dead, Janis Joplin, Jefferson Airplane and other bands. They also staged street theater events such as driving a truck of semi-naked belly dancers through the Financial District, inviting brokers to climb on board and forget their work. On December 17, 1966, the Diggers held a happening called “The Death of Money” in which they dressed in animal masks and carried a large coffin full of fake money down Haight Street, singing “Get out my life, why don’t you babe?” to the tune of Chopin’s “Death March.” This was a precursor to the happening “The Death of Hippie,” staged in October 1967. In “The Death of Hippie,” also staged in the Haight Ashby neighborhood, masked participants carried a coffin with the words “Hippie–Son of Media” on the side. This event was meant to mark the end of the era of Haight-Ashbury. The event was staged in such a way that any media outlet that simply described the happening would unknowingly transmit the Diggers’ message that Hippies were a media invention. This was called “creating the condition you describe”. The Diggers skillfully used this technique for media relations. Their own publications, notably the Digger Papers, are the origin of such phrases as “Do your own thing” and “Today is the first day of the rest of your life.” The Diggers fostered and inspired later groups like the Yippies. (Wikipedia)

The Diggers’ Fredrick Street and Cole Street Free Stores
The Diggers combined street theater, anarcho-direct action, and art happenings in their social agenda of creating a free city. Their most famous activities revolved around distributing free food every day in Golden Gate Park, and distributing “surplus energy” at a series of Free Stores where everything was free for the taking.

The Diggers’ Archive
There is an important Internet archive for the Diggers. This important historical web archive was recently hacked and completely trashed and for a while it looked like it could not be restored, but thankfully it was: http://www.diggers.org/overview.htm.
San Francisco Diggers (c.1966):

* Please see the original article on Don’s website to view more related media, including a 56 min. French documentary about The Diggers.

A 12-part series on the San Francisco counter-cultural movement of 1965-1969 that created a revolution in music and culture. Don Robertson was a part of that movement.

Part One: Berkeley and the Radical Left
Part Two: The Heroes of the Hip
Part Three: More Heroes of the Hip
Part Four: The Scene
Part Five: The Events
Part Six: The Promoters and their Venues
Part Seven: The Quick and the Dead
Part Eight: The Matrix and the Airplane
Part Nine: The Art
Part Ten: The Bands (Part 1)
Part Eleven: The Bands (Part 2)
Part Twelve: Harbinger and the Dawn Album